Crowdfunding has become a go-to effort for relief following hate crimes and mass shootings in the US.

The Muslim-American community has raised tens of thousands of dollars in a crowdfunding effort to help the victims of the Pittsburgh synagogue shooting that left at least 11 people dead and six wounded.

The campaign, which is hosted by Muslim crowdfunding site LaunchGood, aims to help shooting victims, “whether it is the injured victims or the Jewish families who have lost loved ones”.

It was started by Tarek El-Messidi, a Muslim-American speaker and founder of CelebrateMercy, a nonprofit organisation that “teaches about the Prophet Muhammad’s life and character”.

MUSLIMS: Let us stand with our Jewish cousins against this senseless, anti-Semitic murder. Guided by our faith, @CelebrateMercy & @MPower_Change ask you respond to evil with good. Donate now to help shooting victims with funeral expenses & medical bills: http://launchgood.com/synagogue 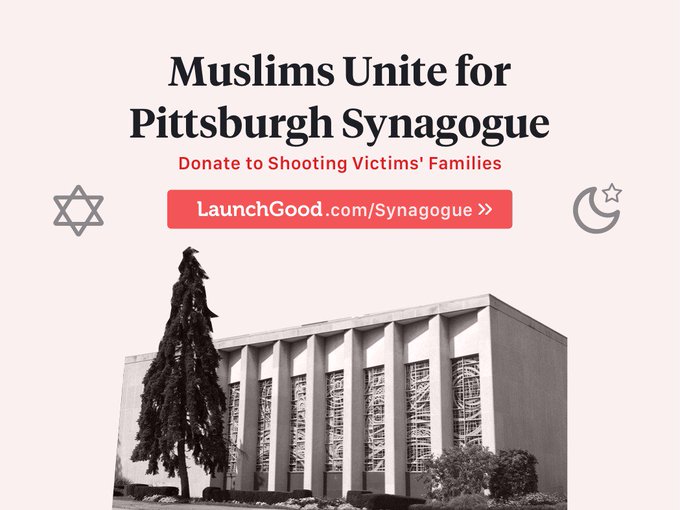 Robert Bowers, 48, has been named as the suspect in Saturday’s mass shooting at the Tree of Life Synagogue in Pittsburgh’s Squirrel Hill neighbourhood. He has been charged with 29 offences, including hate crimes.

According to the Allegheny County medical examiners’ office, the 11 people killed in the synagogue included a married couple, Bernice and Sylvan Simon, and two brothers, Cecil and David Rosenthal.

David Rosenthal was the youngest at 54. The eldest was 97-year-old Rose Mallinger.

Another fundraising campaign was started on GoFundMe by Shay Khatiri, an Iranian who currently lives in Washington, DC, according to his profile on the website.

Khatiri, who appears not to have any direct connection to Pittsburgh, tweeted that his reason for starting the campaign was that he wanted to donate.

He said his “donation would be too little to make any change, but I could make a viral campaign” in response to questions about his motivations.

I am just wondering what motivated you to start a gofundme for the synagogue since you aren’t a member. Can you please explain. Perhaps that will make people feel more comfortable.

That’s a fair question. I woke up today to my friend telling me what happened. My first reaction was “I’m gonna donate a little money to the synagogue to help them recover.” Then I realized that my donation would be too little to make any change, but I could make a viral campaign

The Tree of Life synagogue is also accepting donations on its website, according to a post on the GoFundMe page.

Hours after Paypal confirmed that it had suspended social network platform Gab, two additional companies have informed the site that they plan to suspend their services: payment processing site Stripe, and cloud hosting company Joyent.

Last night, Gab posted a screenshot of a notification from Joyent, which says that it “received notice of breach of the Joyent Terms of Service,” and that it would suspend the site as of 9:00AM ET on Monday, October 29th. Gab says that it will “likely be down for weeks because of this,” and that it is working on a solution.

Later that evening, Gab posted a second notification: Stripe says that it has suspended the site’s account while it conducts an investigation, saying that Gab has “not provided us sufficient evidence that Gab actually prevents violations of our policies in your Gab Pro service, or any other portion of your service that relies on Stripe for monetization.” Stripe estimates that its investigation conclude within a week.

A profile on the site maintained by the alleged shooter, 46-year-old Robert Bowers, surfaced the immediate aftermath of the Pittsburgh shooting, which left eleven people dead and several others wounded. Screenshots revealed that Bowers had published numerous anti-Semitic conspiracy theories, and that has placed Gab under increased scrutiny. While Gab says that it immediately suspended the man’s account and has cooperated with authorities, it has bristled at the suggestion that it was responsible for the environment that has made it an attractive home to those in the alt-right.

Gab has already been booted from other major platforms: Apple and Google have either prevented the site from releasing its app on their mobile stores, while earlier this summer, Microsoft threatened to drop its hosting if the site didn’t remove a pair of anti-Semitic posts within 48 hours. A Microsoft spokesperson told The Verge that the company “terminated its Azure agreement with Gab last month.” Last night, Gab said that it expected to be banned by Facebook and Twitter “soon.”

We’ve reached out to Stripe, and Joyent for comment, and will update this post if we hear back.

Update October 28th 11:45 AM ET: Updated with statement from Microsoft.

The captured suspect in the Pittsburgh synagogue shooting said that “All Jews must die.”

The suspect killed at least eight people at the Tree of Life synagogue on Oct. 27.

KDKA reported that he walked in initially yelling, “All Jews must die.”

The suspect had surrendered to police officers after also wounding three police officers, reported The Associated Press. The synagogue, one of the oldest and largest in the city, was full with a Saturday service. The suspect was injured.

The suspect was identified as Robert Bowers by police officers speaking on police channels, reported independent journalist Nick Monroe. Bowers has not yet been officially identified as the suspect.

In his profile, it says: “Jews are the children of Satan.”

Less than an hour before the shooting spree, Bowers posted on the website, saying: “HIAS likes to bring invaders in that kill our people. I can’t sit by and watch my people get slaughtered. Screw your optics, I’m going in.”

HIAS is a nonprofit that describes itself as “helping refugees rebuild their lives in safety and sanity.”

Bowers also made or shared multiple anti-President Donald Trump posts. In one, he called Trump a “globalist” and said that Trump was not “winning.” In a comment on another, he said: “For the record, I did not vote for him.”